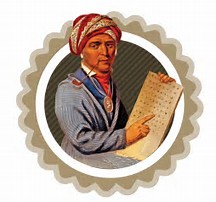 The first Sequoyah Children's Book Award was given in April, 1959, making the award the third oldest children's choice award in the nation.

In 1988, the first Sequoyah Young Adult Book Award was given. Twenty years later the YA book award was changed to “Intermediate Award” and a High School award was created and was first awarded in 2010.

The awards are given annually, usually as an event at the Oklahoma Library Association's Annual Conference.

The Oklahoma Library Association honors Sequoyah for his unique achievement in creating the Cherokee syllabary, the 86 symbols representing the different sounds in the Cherokee language.

His statue is one of the two representing Oklahoma in the U.S. Capitol in Washington, D.C.

The son of a Cherokee mother and a white trader father, Sequoyah, Cherokee for "Lame One," was also known by his English name, George Guess.

A cabin built by Sequoyah as part of a United States government grant still stands near Sallisaw. This grant was the first given for literary achievement in the United States.

1961 Have Space Suit, Will Travel by Robert Heinlein

1963 Mystery of the Haunted Pool by Phyllis Whitney

1964 Where the Panther Screams by William Robinson

1965 A Wrinkle in Time by Madeleine L’Engle

1967 Harriet the Spy by Louise Fitzhugh

1971 Ramona the Pest by Beverly Cleary

1974 Flight of the White Wolf by Mel Ellis

1975 Tales of a Fourth Grade Nothing by Judy Blume

1976 How to Eat Fried Worms by Thomas Rockwell

1977 The Toothpaste Millionaire by Jean Merrill

1979 Summer of the Monkeys by Wilson Rawls

1982 Bunnicula by Deborah and James Howe

1985 Thirteen Ways to Sink a Sub by Jamie Gilson

Just Tell Me When We’re Dead by Eth Clifford

1987 Night of the Twisters by Ivy Ruckman

1992 The Doll in the Garden by Mary Downing Hahn

1995 Horror at the Haunted House by Peg Kehret

1996 The Ghosts of Mercy Manor by Betty Ren Wright

2002 Dork in Disguise by Carol Gorman

2003 Because of Winn-Dixie by Kate DiCamillo

2005 The Stranger Next Door by Peg Kehret

2006 The Tale of Despereaux by Kate DiCamillo

2007 The World According to Humphrey by Betty Birney

2008 Angus and Sadie by Cynthia Voigt

2011 All the Lovely Bad Ones by Mary Downing Hahn

2013 The Strange Case of Origami Yoda by Tom Angleberger

2015 The One and Only Ivan by Katherine Applegate

2016 Chews Your Destiny: The Gumazing Gum Girl! by Rhode Montijo

2011 The Hunger Games by Suzanne Collins

2013 After Ever After by Jordan Sonnenblick

2015 The False Prince by Jennifer A. Nielsen

2010 Thirteen Reasons Why by Jay Asher

2011 The Hunger Games by Suzanne Collins

2015 The Fault in Our Stars by John Green

The Sequoyah Committees are pleased to announce the winners of the Sequoyah Book Awards for 2017: